“We plunged through a green doorway, as sudden as from light into darkness and into the jungle itself where the trees rose in moss-covered columns,  some green, some grey, some mottled, some rough, others smooth, some twisted and distorted, others straight and stately,  all to support a continuing canopy of green … What a garden!”        (Arthur Groom, One Mountain After Another)

Queensland explorer, naturalist and tourism pioneer Arthur Groom’s inspirational account of walking Lamington National Park and the area which surrounds Nightfall. His words perfectly capture the essence of the wild World-Heritage-listed Scenic Rim mountains we call home. Groom’s adventures, and the story of pioneer Bernard O’Reilly’s dramatic rescue of the survivors of a crashed Stinson Airliner, motivate many to visit our part of the world to experience first-hand the majesty and ruggedness of our our backyard, on the doorstep of Brisbane and the Gold Coast. 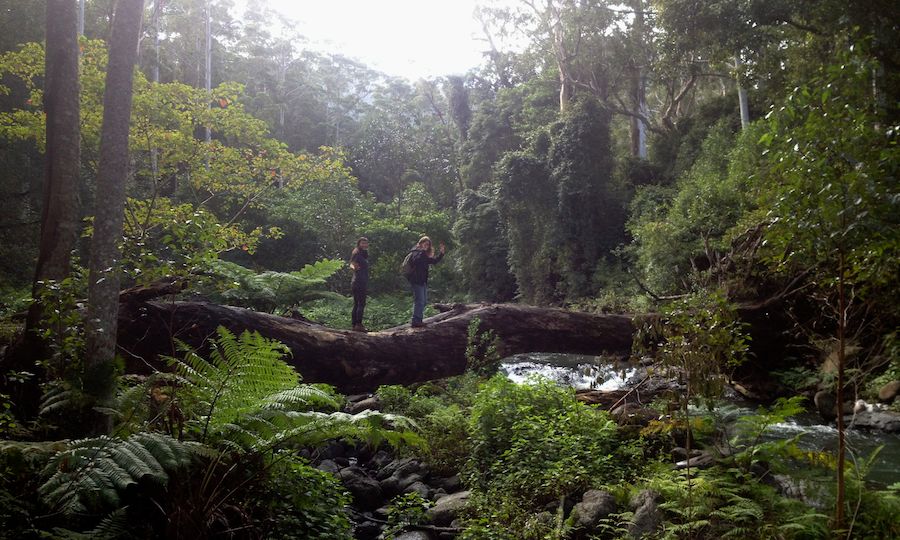 Last week Nightfall’s international volunteer Wwoofer workers Christine and Rhys headed off, walking Lamington National Park’s so-called ‘wilderness section’, in search of the historic Westray’s Grave.  James Westray fell to his death in 1937 – he’d set out to raise the alarm after surviving the crash of a Model A Stinson Airliner on the McPherson Range.  The fabric-covered monoplane, with seven people on-board, vanished in cyclonic conditions en-route from Brisbane to Lismore,  New South Wales.

The fate of the wreck became a national obsession as Air-force and private planes searched far and wide for survivors. In the end it was bushman Bernard O’Reilly who solved the mystery. The Scenic Rim pioneer’s heroic two-day solo-trek,  to a burnt-out spot in the forest,  uncovered the charred remains of the plane and later led to the rescue to the two surviving passengers. Four men did not survive the impact of the crash.

The Stinson rescue is an epic story of courage, determination and adversity, which became the subject the telemovie ‘Riddle of the Stinson’, starring Jack Thompson and also a number of books, including Bernard O’Reilly’s own publication, ‘Green Mountains’. The Queensland State Archive’s Stinson Inquest File also provide a fascinating insight into the crash and subsequent rescue.

The hike from Christmas Creek to Westray’s Grave begins not far from Nightfall’s luxury tent accommodation – a relatively easy trek on an un-formed trail beside the pristine tumbling creek waters. Pockets of piccabeen palms ( Archontophoenix cunninghamiana) and a wide variety of rarely seen plant species are found in the ancient Gondwanna subtropical rainforest which lines the route.

Fitter, more experienced bushwalkers may be interested in continuing on up the steep hillside to reach the Stinson wreck-site. After 76-years in the rainforest, only a few pieces of twisted steel remain. The ravages of time, or possibly vandals, also recently took their toll on the memorial, with the disappearance of the plaque of Captain Rex Boydon. It was a proud day late last year when Nightfall host Steve Ross joined others from The Lost World to place a new name-plate, supplied by the relatives of one of the dead men. (see image above).

While the track to Westray’s Grave is suitable for most fitness levels, the trail from Christmas Creek to the Stinson Wreck is best only attempted by experienced bushwalkers or those who are fit and accompanied by a guide. For those seeking an extreme challenge which rivals sections of the Kokoda Trail, you may also enjoy retracing the epic journey Bernard O’Reilly made from O’Reilly’s Green Mountains section of Lamington National Park to the Stinson wreck site.

Walkers staying at Nightfall also have access to hikes on our property, including  to our little spring-fed ‘waterfall’, overhang cave and the popular Buchanan’s Fort, with its spectacular clear-winter-day views to Brisbane and occasionally the Glass house Mountains. Our dream is to perhaps one day put a ‘swag platform’ on this high-point of Nightfall, so those who’re feeling adventurous can truly ‘camp-out’.  We can’t wait to be the first to try it!