Imagine finding a fish species that’s never before been seen in your part of the world.  Yes, it was excitement all round,  as the scientists who visited the Scenic Rim‘s Nightfall wilderness camp explained their discovery in the headwaters of Christmas Creek, close to where it emerges from Lamington National Park.

For over 11 years, the Department of Science researchers have surveyed fish numbers and species in our pristine Gold Coast Hinterland waterway, using a stun, count and release method called electro-fishing.  The species found were quite consistent, until the scientists last visit, when they discovered a school of Mountain Galaxias (Galaxias olidus).  We’re told this small, elongate, tubular fish only has a nine-metre home range and was previously unknown to our region. The question is which gene pool do Lamington’s Galaxias hail from and how many other species of fish remain undiscovered?

The researchers had a quick, but unsuccessful, look for the Galaxia in Nightfall‘s section of Christmas Creek.  It was their second visit to our Scenic Rim hideaway, where we’re currently building  luxury tent accommodation. A short survey six months ago recorded five species:  Long-finned eels (Anguilla reinhardtil),  Australian Smelt (Retropinna semoni), Freshwater Catfish, also called Dew fish (Tandanus tandanus), Firetail Gudgeon (Hypseleotris galii) and Cox’s Gudgeon (Gobromorphus roxio), the population of which at one point dropped to next to none, but numbers are once more growing strongly.  We also know of Mary River Cod in our headwaters.

Electro-fishing relies on two electrodes which deliver current into the water, momentarily stunning fish close-by and bringing them to the surface.  The fish are not killed but numbers can be counted, species recorded and fish measured along with other data gathered for analysis. 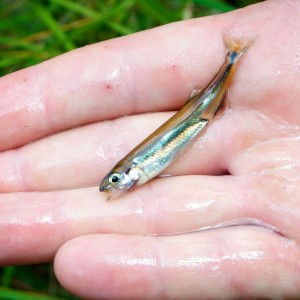 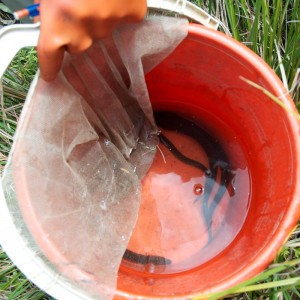 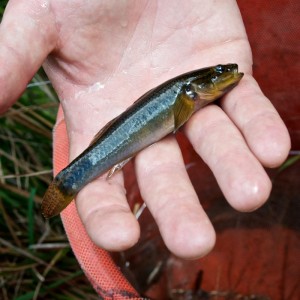