Reflecting on the life of Mr … 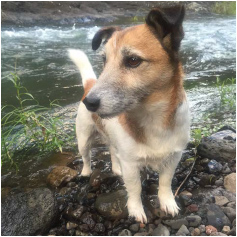 29 Jan Reflecting on the life of Mr …

Reflecting On The Life Of Mr … Nightfall’s Chief Entertainer Was Buried August 2018, At The Ripe-Old Age Of Almost 16

If you’ve visited nightfall you’ll be hard-pressed to forget Mr, our resident Jack Russell with his insatiable talent for finding the soft-spot in your heart, for luring you down to the rapids on a swimming adventure and for convincing you that he was really, really, hungry, so maybe you might be able to part with a square of your breakfast toast.

Perhaps you got to ’shoot’ him? Yes, it doesn’t sound very P.C, but Mr loved tricks and a long time ago we got the idea that he looked like a bunny when he’d sit up on his hindquarters with his little paws out. Rightly or wrongly, at some point, we started to fire a pretend gun with our hands … “bang, bang” we’d say, and the dog would fall to the ground, motionless. “Is he dead?” we’d ask … he’d lay as still as he could, but sometimes his tail would begin just a little thump of excitement … then we’d say ‘no, his tail’s wagging’ … and he’d go dead still again. Ah, that was among his favourite games.

As a tiny puppy Mr was the perfect caricature – we giggled at his then disproportionately huge head and stumpy little legs.

It wasn’t long before our quirky little pup surprised us: he was smart! When we were too busy to throw the ball, he worked out that he could take it up the top of the hill, push it off the edge and give chase down the steep slope.

Mr was a peacekeeper, always looking after the kids and trying to stop the neighbours dogs blueing. But there were times when we weren’t sure he knew he was a dog. Living on the land, his desire to fit in was so great that he’d mingle with the chickens, ‘pecking’ at the ground, eating grass like a hen. “I’m one of you…” Reluctantly he’ ‘shared’ his dad (Steve) with Lilly, the baby wallaby. Very reluctantly. He was even jealous of the neighbours’ pig (for whom we’d save our food scraps). Mr would copy the pig’s rooting and digging action as if to say, look at me, I’m just the same … now feed me the scraps!

For almost 16 years Mr was Steve’s shadow. They had a bond like no other and Mr has been with Steve through thick and thin. He slept in a cardboard box beside Steve, they shared daily ‘dad time’ adventures on the bobcat, the excavator and cruising the camp in nightfall’s guest buggy. Second to Steve was Mr’s passion for Steve’s father Neil. ‘Grandad’ came with arrowroot biscuits, so he knew just the way to Mr’s affections …

Over the years Mr featured on nightfall’s blog and social media, but we didn’t appreciate his popularity until we noticed guests knew Mr’s name even when they arrived for the first time. Celebrity status! He took it upon himself to make visitors at home, sharing space in the lounge and sometimes covertly visiting their tents for snuggles and tit-bits.

His favourite pastime was luring guests on walks, rock-hopping down the creek, or better-still a rapid-riding adventure. If you were floating in a tube, Mr’d either be in your lap, racing down the rapids beside you or even riding the tube himself.

Mr and Steve had a game – the dog would have to wait at least 10 metres from the water’s edge. Steve would be a little closer and would start to count down. “Three, two..” – and Mr’s body would quiver with excitement – “one!” Both would dive for the water. For Mr, this was a determined race to the edge before Steve, with the hugest flying leap through the air in his quest to beat Dad!

Ah, those days. So many incredible memories. So much heartfelt connection and the quiet understanding of a loyal dog, always there, full of love and uncomplicated joy. 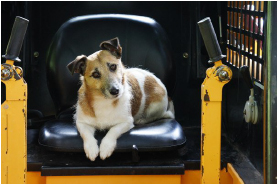