PARROTS, AN ECHIDNA & A SIGNIFICANT BIRTHDAY 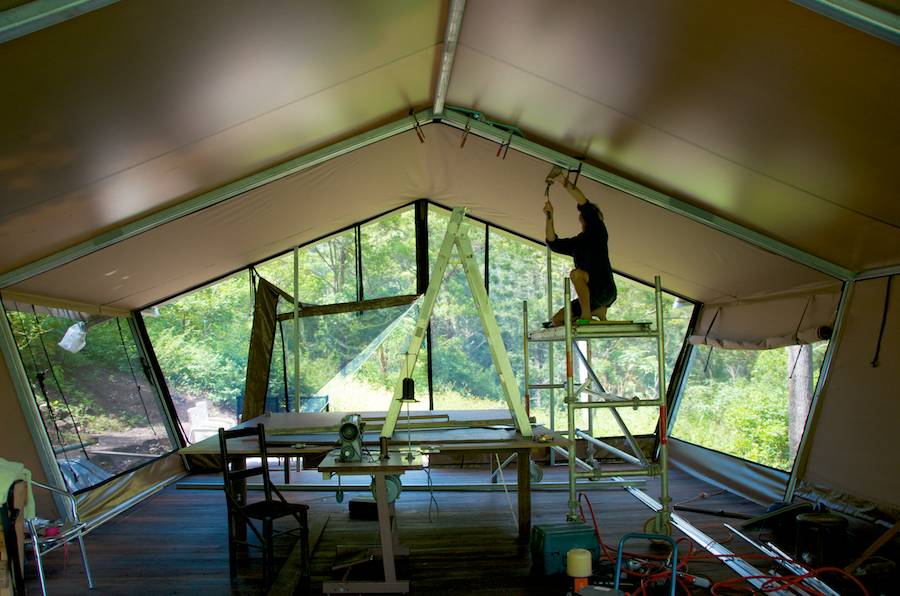 As I began to write this diary update late yesterday, we rejoiced in a short-lived moment of sunshine. The cliff face in front of Nightfall’s new staff tent glowed strikingly gold in the dusk light, the mist swirled around its rugged rocky face and the dark and brooding clouds remained in the background.  Not long after, the heavy rain began again and now more than 12 hours later, it continues to fall across this part of Queensland.  Since January Nightfall’s mountain site has had a total of about five days without rain or showers – we’ve given up counting, but we’re told it’s a record wet spell.  Now a wet winter is also forecast.  What to do, but keep working. Stubborn determination I think you call it!

Just before Easter we installed Nightfall’s staff tent ceiling.  As you can see from the photo, our bespoke permanent tents have a lovely open feel which comes mostly from the angled wall design, dramatic openings and 60+ metres of floor-space.  Nightfall’s guest luxury tent accommodation will be very similar, although the front panels are mesh and canvas, not clear pvc.  Instead we’ve used clear roll-up panels on the northern walls, including the shower, further blurring the line between indoors and out.

The new staff tent is where I spend my days sewing our other tents. I have to admit some days the birds and wildlife are a wonderful distraction – it’s almost as if the tent becomes a ‘hide’, from where you can spy on their antics.  Shy wallabies wander past looking for fresh new shoots; the occasional echidna shuffles by and the Brown Cuckoo Doves sit gracefully together, in contrast to the inquisitive red, green and turquoise King Parrots.  Their exploring ways are punctuated by a characteristic parrot-talk. In the last few days flocks of petite fairy-wren like birds have also moved in. Theirs is a high pitched fast chatter and the bushes around the tent come alive with plump little brown females and the occasional male with his bright blue cheek colouring. Maybe tonight I’ll get time to confirm their identity in the Australian bird books from our expanding camp library.

Easter was a time of celebration and a break from building Nightfall. Steve turned 50 and more than 100 friends and family took the opportunity to come for a delightful evening, many bringing their own tents to camp for a couple of days. It was lovely to relax and catch up with each others lives. The children and some playful adults especially enjoyed tubing down the creek rapids and rock-hopping to our ‘platypus pond’. We even had a rare break in the rain.

What’s next in the adventure to craft our little Queensland retreat? Well that depends on the rain! I’ll keep sewing tents and maybe Steve will get to finally stand the portal frames which have been ready and waiting for weeks. We’ll keep you posted. 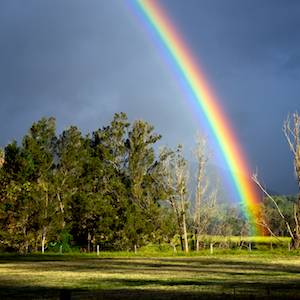 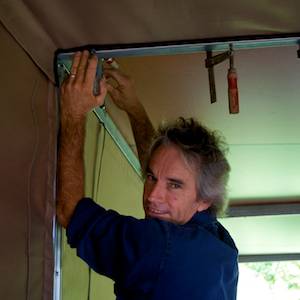